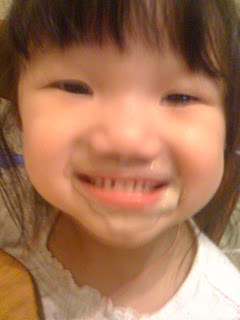 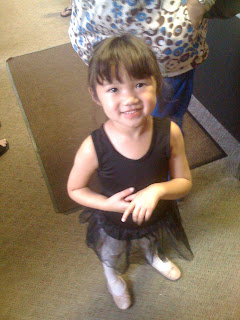 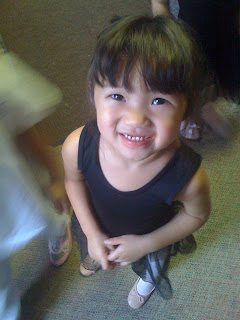 Tuesdays are Gracie's dance night. Her class is tap and ballet but all she talks about is ballet. Gracie loves ballet. She carries her ballet slippers in her special Winni-The-Pooh back pack. She calls it, 'My ballet'. We have to keep reminding her that ballet slippers are for the dance studio only and not everyday shoes! Gracie waited a long time to take this dance class. She has wanted to follow in Rita's footsteps from the first time she became aware that Rita was even taking dance classes.
Gracie practices her steps between classes. Her routine consists of taking one foot and pointing it to the front, side and back and then bringing her feet back together and repeating with the other foot. At first she was not getting the motions and the names of the directions to work in synch - for example, she would gracefully point her foot out in front of her little body and declare the motion to be 'back'. After a few weeks, she is now getting the motion and the name of the motion to match more times than not. Regardless, at the end of her little routine, she sweeps into a grand bow and expects applause! Rita is usually her biggest fan and her only critic. Rita can correct her and help her to align the motions and names for the motions; Tom get scolded if he tries to help!
Gracie was so into this dance class and the teacher has a rule that she will only take children who are potty-trained. This was a big motivation for Grace to work on that. We were having some issues with potty-training even up until the summer. However, when she was told that she could not dance if she was having accidents all day, she quickly found some much needed control. There is still the occasional accident but they are now rare.
Tonight Grace had a Halloween party at her dance class. She was able to trade her candy in for treats at the dollar store right after her party. That was a success. Hopefully the same play will work for her on Friday with a party at day care and on Saturday when she goes trick-or-treating!
The pictures are from Ballet night and just an extra that I love of her enjoying a pudding treat.
Posted by Marie at 8:50 PM 1 comment: 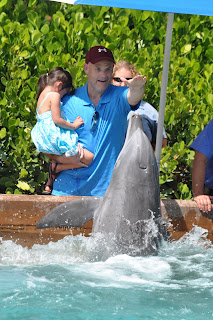 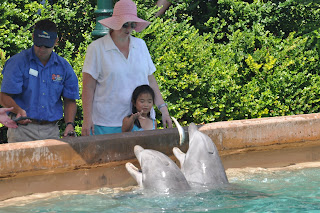 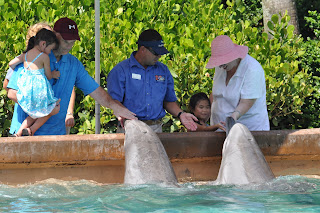 Sorry for the delay in posting. Things got a bit busy here and the updates were missed. Everything in fine. Grace remains seizure-free since the incident in mid-September. WOOHOO!
Gracie continues with the diet at the 2:1 ratio. We have found this to be manageable. Peanut butter, cashews, peanuts, and canola oil are lifesavers. We even mixed in some beef jerky. Gracie loves eating some of the fresh fruits and vegetables readily available. We have found that she loves seafood - and dipping it in butter - lots of butter. This is a great vehicle to get her to eat the butter. She usually requires a massive clean-up effort afterwards but it is so great to see her eat with such gusto. Gracie is just about back to the weight she started at when she started this diet. She is three inches taller but she no longer looks so gaunt.
We took a trip to Florida the end of September, beginning of October. We had a timeshare week that was a use it or lose it deal so we decided to use it! The girls were thrilled at another chance to see Shamu and visit Sea World. We did the dolphin spotlight tour. It was great. I have added some photos from that. Our kids are funny - they go to Orlando for SeaWorld and sometimes we see Disney.
I'll try to get more regular with the postings now!
Thanks for checking in with us!
Marie, Tom, Rita and Gracie
Posted by Marie at 10:03 AM 3 comments: