Grace continues with her seizure free streak. I think I may actually be getting complaicent about the seizures. I have caught us going out without her Diastat and 'emergency bag'. There was a time I didn't even go for a walk down to he corner without the emergency bag. We have been running out for errands or short trips and I get home to realize that we left without the bag. By the grace of God, we have been ok. We need to work on keeping our guard up. It is wonderful to have moved to this phase though! I appreciate that this is an upgrade of problems.

Grace is still haveing eating days and non-eating days. There are days she is ravenous and want to eat everything in site. And then there are days that we can barely to get her to eat. With her new meal plan, Grace gets some additionalo carbs. This has helped her a bit. She now gets a single cracker for a meal. She has developed a love of Ritz crackers! We heap a big gob of butter on the cracker and she usually eats it. We had one or two times when she even went so far as to have the spoonful of butter after the cracker. This is great as it means less oil in the syringe after her meal!

Friday is Rita's last day of kindergarten. Wow! I am amazed when I think about everything she learned this past year. She can read. She can count change and use coins. She is learning Spanish and tries to teach us as well. Her imagination is abundant! I grew up at a time when kindergarten was optional! I learned what she did this year when I was in first grade. Kids these days are so smart. She is one of 25 children in her class and they all have done an amazing job!

Thanks for checking in!
Posted by Marie at 9:56 PM 1 comment: 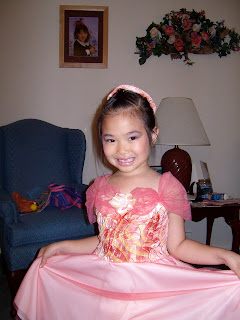 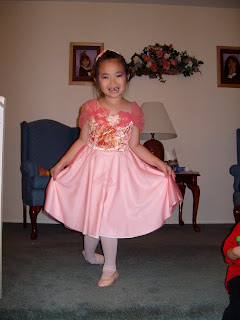 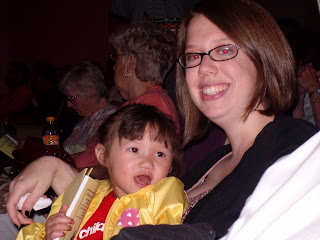 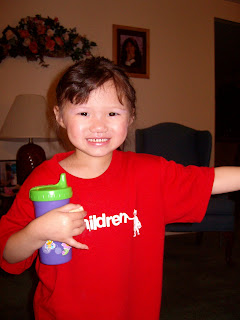 We have reached 100 days of seizure freedom! Yahoo!!! We are all so excited to get to three digits in our count. Grace is oblivious to it. She is miserable today. She is tired and cranky and has a runny nose. Hopefully she will take a nap and wake up in a better mood.
Overall Gracie is doing fine. She is hovering at the 28 pound mark for her weight. Her hair is still thinning a bit. In terms of degrees, you can see her scalp through her hair when you look down at her head. It is not overtly noticable at this point.
Rita had her dance recital this week. This was her third recital. She loved performing and had the hugeswt smile on her face the whole time she was on stage. Grace is so ready to have her turn in the spotlight! She was taking dance earlier this year but we stopped it in March when things got crazy. Next year, Gracie can take a class and be a part of the show. She can hardly wait!
This is birthday party weekend for Rita. She has 2 birthday parties this weekend - one today at a swing set place and one tomorrow at Build-a-Bear. I get to take her to both. However, I was informed this morning that she would rather if her Father took her - he is more fun! Children are way too honest sometimes! I was surprised that she wanted Tom to take her to today's party - the guest of honor is the same boy how called her earlier this week.
While Rita and I are going to parties, Tom asked Gracie what she wants to do. Gracie's response is that she wants to take a walk. This is her frequent request. She loves to take a walk after dinner each night. A walk to Gracie is that she gets into a stroller or wagon and gets pushed or pulled around the neighborhood. Tom thinks it's funny that she wants to keep walking when she doesn't do any walking! Rita now likes to take her bike out. She will ride along while we all walk (or ride). The kids like looking for birds, rabbit and other animals while on a walk. It's good for all of us.
Thanks for checking in.
Marie, Tom, Rita and Gracie
Posted by Marie at 11:08 AM 1 comment:

We just had a very amusing phone exchange...Rita had her first phone call from a boy! I did mention that she just turned six, didn't I??? This is very strange. It's a good thing he r father was not home yet. He told her she is not allowed to talk to boys until she is 30! Anyhow, the boy in question called and asked to talk to Rita. I gave her the phone. She handed it back to me to talk twice. Then the phone was returned to me to hang it up. Rita seemed quite pleased that this boy called her. I just don't know how I am going to break this to her father!

The girls are growing up so fast. Rita is now six and she has only 9 days of kindergarten left! Gracie is three but she is now telling folks she is five. Sometimes she says she is three and five. Despite everything that has been going on with Gracie she is right about where we would expect her to be at three (almost three and a half).

Grace seems to have adjusted to her last medication shift quite nicely. She is noticably more alert and interactive with everyone. She is certainly more playful. We often wonder how much all of the medication represses Gracie. Since we would not dream if withholding her meds to find out, we can only guess. However, a few weeks now after dropping her dose of Depakote, we see more of her personality coming through. She is one funny kid!

Grace is now officially on the ketogenic diet at a 2:1 ration. The nutritionist determined that is her ratio since we started letting her eat unlimited protein. We were given a full meal plan at this ratio. We are no longer using the heavy cream option so she must have a syringe of oil with every meal but she gets more carbs and protein so she seems happy with it. The plan we are at now definately seems like something we can live with. It is much more portable and we are eating out again now.

Whatever we are doing, Grace seems to be responding well to it. On the home scale she is up to 28 pounds. This is a victory for us. She was 31 pounds before starting the diet but we were having trouble getting her over 26 pounds. We are also in the 90+ day range for seizure freedom! Another victory. We are awaiting the lab results to see if we need to add any additional suppliments. Her hair has thinned out a bit. We can deal with that. Hair is not so important in our house :-)

Thanks for checking in!
Posted by Marie at 5:55 PM 1 comment: